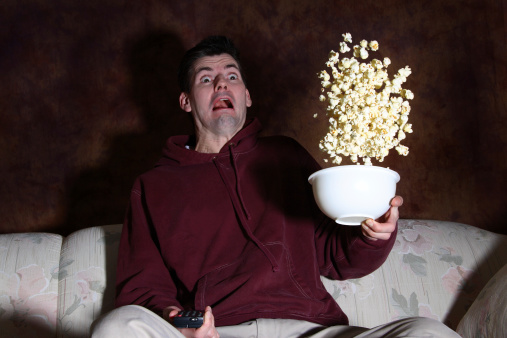 We will accept nothing less than this reaction.

Horror movies come in many genres and plots, but there are some classics deserving of a watch on Halloween. Some of my favorites include these slashers, thrillers and mysteries, and some stereotypical horror movies that get the job done. All of these will surely bring terror and joy.

Halloween shockingly takes place on Halloween in 1963. There are over ten different movies to this series and multiple remakes. But the first one is my personal favorite and sticks to an original story line. The background story is that in 1963, on Halloween night, Judith Myers was killed by her little brother Michael. He was put into a mental institution for years, and, when he escaped 15 years later, he headed back to his hometown on the hunt once again for a new victim named Laurie Strode (portrayed by Jamie Lee Curtis). This movie was one of the creepier movies I’ve watched. Although not particularly scary and lacking gore, it’ll still make you shiver. If someone is looking for the spook factor, watch this on Halloween night for a fright.

A Nightmare on Elm Street

A Nightmare on Elm Street is another classic slasher film. This one is definitely a scary film, at least for me. The serial killer’s name may be recognizable, Freddy Krueger, who is known for his mutilated face, striped shirt, and knife hands. He stalks teenagers in their dreams, and any injuries he inflicts on his victims in their dreams are translated into real life. So, when they die in a dream, they die in real life. When the four main characters realize that they share similar dreams with the same killer, they are very uneasy. Most of the plot takes place during a sleepover with the four main characters. That’s all I’ll say.  Overall the plot is well thought out and it’s a really good movie. I really enjoy this movie, but the special effects aren’t fantastic so it wasn’t super frightening or realistic in my opinion.

I love this movie. Okay, it’s another slasher movie, but I think slashers are some of the most fun to watch. It takes place at a summer camp called Crystal Lake, where a kid had mysteriously drowned and counselors had been murdered over previous summers. The original owners, along with some counselors, reopen camp the following summer only to be stalked and killed by a serial killer. This film is another “try to solve the mystery” movie (my personal favorite) because you know just as much as the characters and are trying to find out who the killer is before it’s too late.

This movie honestly terrified me. I’d definitely watch it on repeat though because every time I watch it I find another Easter Egg in the plot, a foreshadowing, or hidden element that I hadn’t noticed before. This is about a family who visits their summer house. In the past, the main character (the mother of the family of four), had gone to the beach and wandered into a hall of mirrors near a boardwalk. Something happens there that messes her up. She doesn’t recover for years, can’t speak, and comes out different. Fast forward to her family in the future, she starts noticing some strange things around her. She wants to go home, but before they have a chance, a family of clones stops them. They have to try to stay alive as their psychotic clones target them. Jordan Peele (director of a similar psychological-thriller Get Out continues to prove his talent with Us). Peele leaves little moments of foreshadowing all over the movie, some you may not catch on the first watch.  Us gave me some nightmares, but it was well made and mysterious. There were so many plot twists in this movie, it was impossible to be bored. This movie is more modern than the slashers, so it’s more realistic, and it’s probably the scariest out of the five movies. I’d highly recommend it, and it would be a perfect watch on Halloween. Just, stay away from mirrors for a while, right?

I saved the best for last. This movie is one of my all-time favorite horror films. It’s become a classic over the past 20+ years and it’s always fun to watch. The cast alone is such a fantastic group of actors, so expectations are high. Starring Neve Campbell as Sidney Prescott, the teenage girl is targeted by the ghost-faced killer. The serial killer goes after Sidney and her high school friends. After several attempts on Sidney’s life, she and her friends have suspicions about the killer and try to stay alive through the film. The killer calls their victims’ home phones before they act, and it’s pretty creepy. On the phone he tends to play games with his victims, he asks Drew Barrymore, “what’s your favorite scary movie?” My favorite aspect of this movie is trying to solve the mystery as the watcher. There are many plot twists, and the suspense will get you. It would be a perfect watch on Halloween, just the right amount of scare, and you’d be in stock for a good old cheesy horror movie.

If you’ve survived up to this point, I hope you’ll take these movies into consideration, have a happy Halloween!