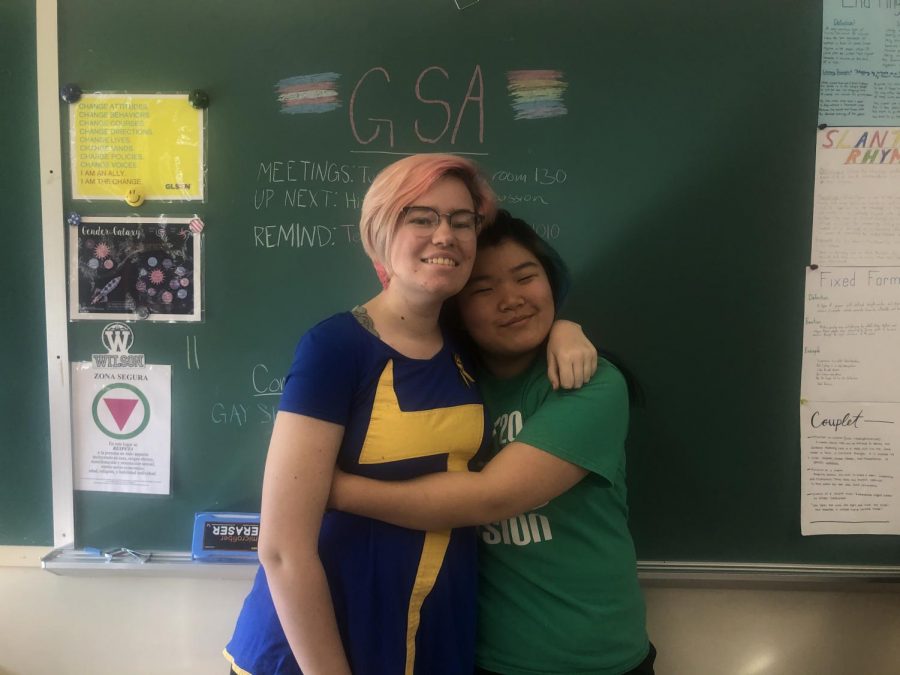 A transgender female student has her pronoun assumed in class after coming out. A trans male student is refused access to the male restrooms. A non-binary identifying student is bullied online after changing their preferred name on their social media profile. These are real scenarios that many students in the transgender and gender non-conforming community face every day.

A study by GLSEN (Gay, Lesbian & Straight Education Network), showed more than 75 percent of transgender students don’t feel safe in their own school due to bullying and harassment. One way schools can help such students feel supported is to acknowledge and use their preferred names and/or pronouns in a classroom setting.

Teachers play an important role by setting an example of supporting students struggling with gender identity. This helps to create a healthy environment for those students and teaches other students how to approach those scenarios.

“You can see how important it is to those specific students that go by a different pronoun, and to some kids or even adults it might not seem like a big deal. It’s like how would you feel if someone called you or labeled you something that you’re not?” Wilson teacher Stephanie Satoorian said. Satoorian believes all students should be accepted for their gender identity. “If a kid is more comfortable with a certain pronoun, why wouldn’t I call them by that?”

But not every teacher is like Satoorian. Many teachers simply don’t think of pronouns as an issue. “I personally feel like I have allies at school when my teachers introduce themselves with their pronouns or when my teachers are educated about LGBT issues or when they ask for their student’s pronouns,” Ally Krantz Grommes, senior said. Grommes is the head of the Gender Sexuality Alliance (GSA) club at Wilson and is passionate about student activism, in particular regarding LGBT issues.

When discussing teachers who made the effort to ask her about her preferred pronoun, Grommes said, “The teachers that did ask, I felt really comfortable around and I was much closer with and I worked harder in their classes.” When students feel more accepted and safe, that can improve their academic performance.

Before the school year started, Grommes went to the new principal, Principal Hristic, to give a voice to the GSA with the hopes of hosting a training on gender equity. The session became a reality, and Grommes, along with other members from GSA, held a session with the teachers prior to the beginning of school.

“It’s really important to me that the younger LGBT kids at Wilson feel supported,” Grommes said. “I want them to feel like they’re in a safe space and that they feel that this school is a welcoming environment for them.”

Grommes’ hard work hasn’t been a waste. A student poll conducted this fall revealed that four out of the five students reported teachers in four or more of their classes asked students to share preferred names and pronouns in class. This is a huge improvement compared to Grommes’ freshman and sophomore years where no teachers bothered to ask. But while the school is making progress, more work needs to be done.

“You can tell your teacher all you want, but students don’t really give a shit. They’re gonna call you by whatever they wanna call you, which is probably your birth name,” Bee Wolfsehr, junior, said. Junior Parker Kodachi agrees with Wolfsehr, accounting on several occasions where a fellow classmate deliberately refused to call them by their preferred name and pronoun too.

Kodachi goes further into the topic expanding on bullying on the matter. “We’ve grown up in a generation that’s been told no bullying,” Kodachi says. “But discrimination is still happening every day, even in fairly liberal areas like Portland.”

Oli Devereux, junior and active member of the GSA, talks about the importance of the issue, and why it shouldn’t be ignored. “It’s not about giving trans kids the most rights or feel special or something, it’s just trying to make them feel safe and comfortable,” Devereux said. Devereux also explains that if you aren’t sure about someone’s gender identity, just ask them about it in a private setting. “If pronouns are assumed, it hurts a lot. If you ask, you feel safe and seen.”

Junior Nico Schafer adds to Devereux’s statement that normalizing asking for people’s pronouns outside the classroom is a simple solution that could help the problem. Schafer explains that changing pronouns is scary, and having something like this in place would really help. “Everybody has their thing that can affect how you do in school. I hope that eventually, everybody will be more mindful of the things in people’s personal lives.”

A solution that the interviewees seem to agree on is that everyone, regardless of their gender, should identify their pronouns when introducing themselves. “It’d be cool if everybody had to actually go around and state their pronouns, even if they’re cis because it’d make everybody feel way more comfortable,” Wolfsehr says. “This could be a way for all students to start to respect each other’s pronouns.”

Kodachi hopes to include pronouns in future climate lessons. “If the teachers are making an effort to make students more comfortable, I feel like there should also be more of a push to get students to meet that same effort.”

Wilson has made strides in the right direction, but there is still improvement to be made. Acknowledging our differences should be our strength. If we stand together we may be able to make this idea into our reality.