Awareness and Action for Missing and Murdered Indigenous Women 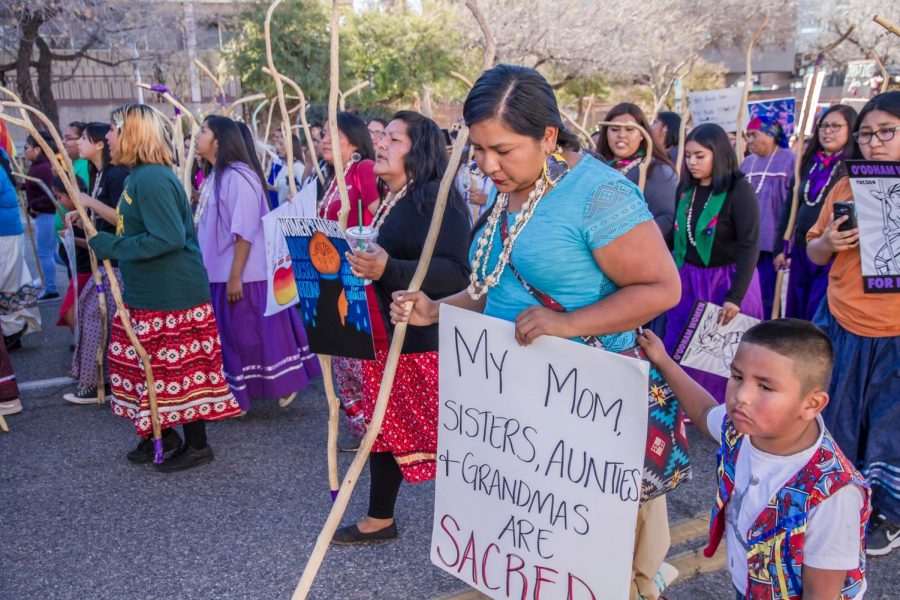 In 2020, more than 6,000 Native American women were reported missing in the United States. Another 1,200 women in Canada went missing. Violence towards Indigenous women is now an epidemic. Organizations such as Missing and Murdered Indigenous Women and Girls (MMIWG), located in Canada, and MMIWGUSA are fighting for change and justice for the sisters who were stolen from them.

Perhaps the largest reason why MMIW isn’t being treated as a massive crisis is racism. Native people are often stereotyped as savages, alcoholics or drug addicts. So when a Native person is reported missing, police often write it off as a drug or prostitution related incident and don’t look into it.

Kalim Crawford is a member of both the Blackfeet and the Confederated Salish and Kootenai tribes living on a Flathead reservation in Montana. Crawford’s cousin, Ashley Loring-HeavyRunner was 20 when she went missing. “She was a bright and kind person, she babysat me when I was little. She planned to go to Blackfeet Community College for photography,” said Crawford. “I say ‘was’ because she’s been missing for so long it is unlikely she’s still alive.”

Loring-HeavyRunner is one of over 600 missing Native women in Montana. The reservation where Crawford lives has over 200 missing. “It’s heartbreaking,” Crawford said. “You hear from someone’s family or in the papers that someone’s child is missing. You know they will probably not be found.”

“Cops often think these cases are a waste of time and dismiss families of the missing,” said Crawford. “Saying they are out partying or something just to avoid paperwork.”

The effects of the MMIWG crisis are far-reaching in Native communities. “The past hundred or so years of Native history have been pretty scary. To have women and girls disappear at a time where building community and culture are very important is just devastating.” Native communities have had so much taken from them, and have struggled so much to rebuild. This crisis adds a new layer of devastation after hundreds of years of systemic racism and oppression. Families and young people live in fear that this could happen to them. Trauma from violent crimes remains in communities for generations. Families of the missing and murdered often experience mental health issues such as depression, anxiety, and substance abuse.

Many factors limit investigation into the MMIW crisis. A national database for MMIW does not yet exist, so the accuracy of statistics is unreliable. Poverty is another huge roadblock. Native people are some of the most impoverished in the country. Most live on reservations or in subsidised housing. Resources are spread thin due to the lack of funding.

Another factor impeding investigation is the fact that most tribes have sovereignty over their land, and their own police force. Many tribes are unwilling or unable to cooperate with police outside of their tribe, a bill was even passed that maintained that tribes have no jurisdiction over non-native attackers or suspects. Since many suspects of crimes against Native women are transient workers such as coal miners, offenders are rarely prosecuted. Many missing cases go unreported or aren’t incorporated into databases due to these issues. Out of over 500 Montana cases, only 58 made it to the FBI.

A growing theory about the possible perpetrators of these crimes are residents of Man Camps. “Man camps” constructed for male workers on the Keystone XL pipeline and the Bakken Oil region in Montana and South Dakota are built very close to Reservations so they can leech off the natural resources. Many of these men have records for violent crimes. Since Montana tribes are extremely isolated; police presence is minimal, and resources are spread thin. The violent crime rates in areas surrounding these camps went up over 70% in the past four years. Rape, Sexual violence against minors, and sex trafficking cases have skyrocketed in those areas as well. Many Native representatives are pushing to get these camps moved away from Reservations.

Publicity around the MMIWG crisis is critical. Even if you aren’t Native, here is what you can do to help. Use social media to spread awareness. Post names and descriptions of missing women. Donate to Indigenous organizations and participate in fundraisers. Call state representatives and start conversations about the movement. Whatever you do, don’t contribute to the problem by remaining uninformed and silent.