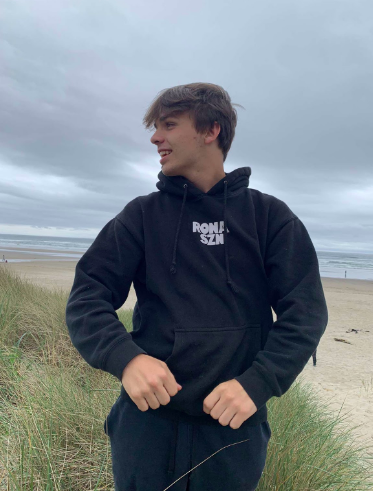 Soccer has its history of primadonnas, players who believe it’s a one-man show. A selfless player who shows readiness, is prepared, and has the right attitude to step it up is what a team spirit is really about. Jacob Berg is that guy.

Berg has been playing soccer ever since he can remember. At the age of four, Berg started playing for his club team, Bridlemile Soccer Club. “I didn’t have a main position at that point, I was moved around from striker to center midfield, to defense,” said Berg.

After the merger of Bridlemile Soccer Club and Northeast United, Berg decided that moving to Westside Timbers was the best option. While playing at Westside, Berg’s team was able to qualify for Surf’s Cup in Las Vegas, placing second. After two years at Westside Timbers, Berg decided to leave the club. “Although it was fun,” Berg said, “I didn’t really have a group to fit in there. I’d rather play recreational soccer with my friends and have fun.”

After leaving club soccer, Berg wanted to try out for Ida B. Wells’s soccer team. He made the JV2 team as a starting midfielder. “Playing for JV2 was really fun because it was competitive, but a lot more chill,” said Berg. After enjoying his first year he was excited for the next. Starting again in midfield for JV, Berg described it as intense, saying “definitely more physical and more work.” Berg still performed well during his second year, helping his team finish with a season of four wins, ties, and losses.

This year, the soccer season started a little bit later due to COVID-19. “I thought we weren’t going to have a season at all, but it was some extra time to get in shape and more touches on the ball,” he said. Berg made the varsity team but ended up not being a starter. Not being upset with being a substitute, Berg kept working during and after practices, playing in matches with his father, and scrimmaging with his friends. “As a sub I always anticipated myself getting subbed in so whenever I was called upon I was mentally ready.”

During a match against Centennial High School, the starting defensive right-back was absent, allowing Berg to play. Berg was given the opportunity to prove himself. Prove himself Berg did, becoming a starter as defensive right back. He was confident and made the right decisions during the game, cementing his starting position.

As the season went on Berg got more confident in playing. He was able to get the ball down, controlled, and have a few looks on the net. Unfortunately, Berg did pick up a minor ankle injury. “I’m not sure what it was but whenever I landed, my ankle and foot shifted,” said Berg. “It wasn’t super painful, but it felt so weird to play with.” Despite this, Berg helped the varsity defense only have 12 goals scored on them in the season and finish fourth in the Portland Interscholastic League.

Berg is a classic example of a team player. He is adaptive. He showed that he didn’t lose out when his position on the team changed and was willing to step up and learn new positions.

Berg’s dedication has shown everyone that putting the work in pays off. Berg plans to keep playing varsity soccer for his senior year and lead the team. He hasn’t established where he wants to play soccer after high school whether it be recreational or for a university. No matter where he ends up, Berg wants to keep playing and continue to bring his talent and enthusiasm to the field.